OneBlood is saluting everyday superhero blood donors through the comic-book-inspired There's A Hero In You In 2022 campaign. In honor of Black History Month, we dug into the background of the 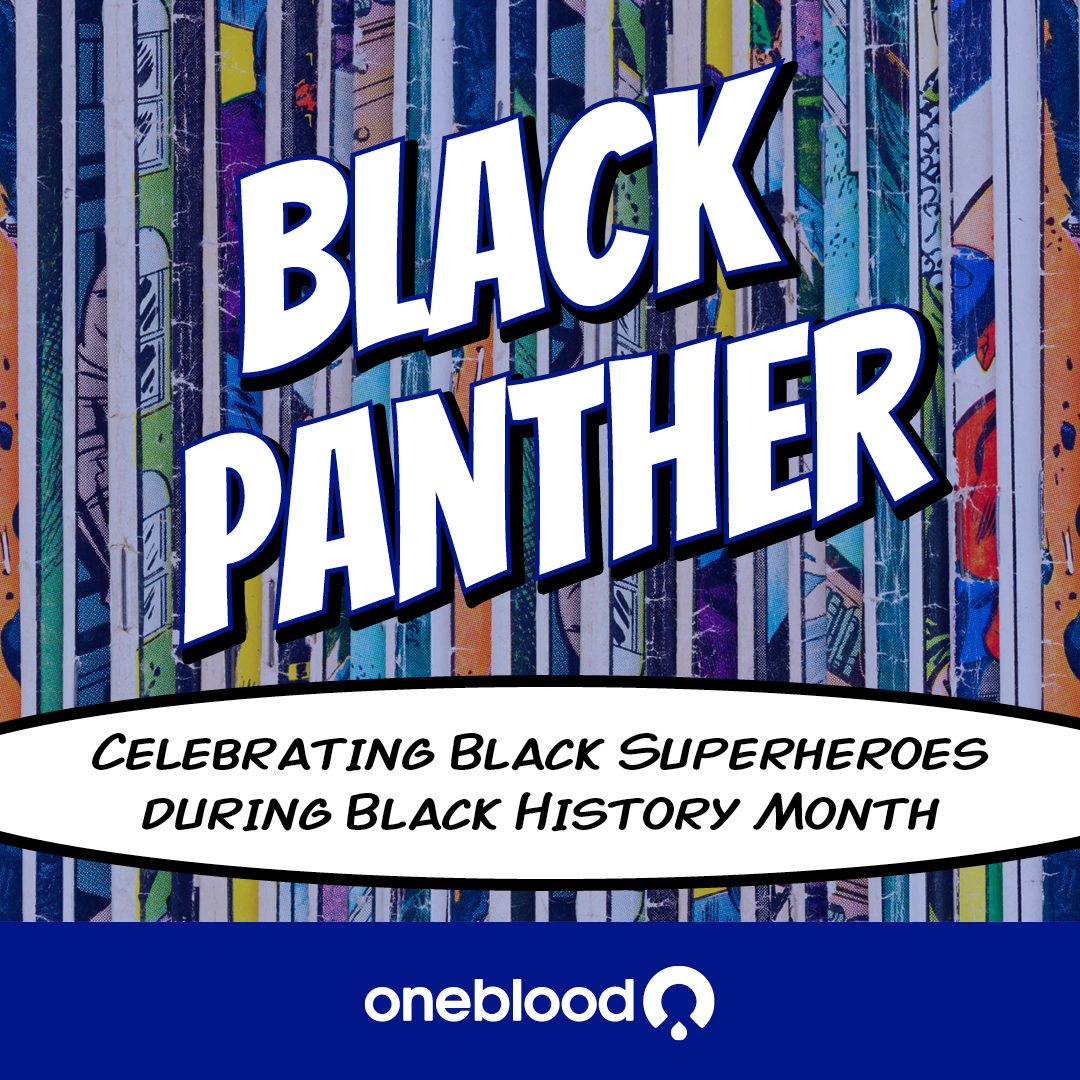 Many saw the recent blockbuster movie, Black Panther, as a long-overdue inclusion of a strong Black character into Marvel Comics’ groundbreaking cinematic franchise.

But King T’Challa – ruler of the advanced, fictional African nation of Wakanda – has worn his superhero mantle into battle for the better part of half a century. As such, this early Stan Lee/Jack Kirby creation ranks as the first mainstream superhero of African descent.

The Black Panther superhero arrived on the comics scene in July 1966, in Fantastic Four #52.

Propelled by comics legend Stan Lee’s desire for inclusive ethnic representation in comic books, Black Panther was not specifically a reference to the 60’s political movement of the same name, but rather a reaction to the fact that many of Lee’s friends at the time – who happened to be Black – were not being represented in comics.

In the decades since that first fateful appearance, Black Panther has ruled in his own self-titled comic books, as well as made numerous guest appearances in other comics throughout the Marvel universe. In 1968 he even joined The Avengers for a brief time.

T’Challa’s popularity through the years finally earned the character a proper movie adaption in 2018, as well as a unique place in the ongoing Marvel Cinematic Universe.

Brought to life by actor Chadwick Boseman and directed by Ryan Coogler, The Black Panther film earned rave reviews, numerous award nominations (including the first-ever Academy Awards Best Picture nomination for a superhero film), and ongoing respect from comics fans everywhere. It remains one of Marvel’s most well-received cinematic achievements.

In addition to the successful film, Boseman also guest-starred as the Black Panther character in other MCU flicks. He had also signed on for reprising his titular role in further Black Panther movies. Unfortunately, Boseman died on August 28, 2020 due to complications related to colon cancer. He was 43 years old.

The sequel, Black Panther: Wakanda Forever, is currently on track for a late 2022 release.

Heroes are made by the path they choose! If you are ready to be a hero of cinematic greatness make an appointment to donate blood today. There is no substitute for blood it only comes from volunteer donors.

Paul Ramey is a OneBlood Graphic Designer, as well as a published author (Edgar Wilde and the Lost Grimoire). Paul is very proud to be part of OneBlood’s lifesaving team.

A Brief History of Superhero Dads

A Brief History of Female Superheroes